Last week we tackled the place to escape that are (somewhat) easily accessible via a car trip or a train ride. Many of us, however, may not have access to a car at this time.

Thus, we wanted to tackle this much asked question—what is the best place to escape when you're not really escaping? As in, places to find a moment within the 5 boroughs. 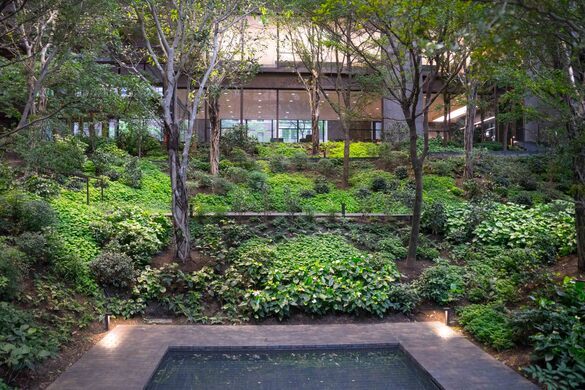 The area around Grand Central tends to be the noisiest and most hectic areas of Manhattan, but walk just a few avenues over to the Ford Foundation building and a tropical wonderland awaits. Located on 43rd street just off of Second Avenue, the atrium of the Ford Foundation building is comprised of a beautifully verdant subtropical garden, with a reflecting pool at its center. Walking around the beautiful terraced space is indeed surreal and offers a respite from the concrete jungle outside.

Originally designed by architects Dan Kiley, Kevin Roche, and John Dinkeloo, the building was deemed a New York City landmark in the 1990s. Struggling with asbestos and general wear-and-tear, the building closed in 2015 for a renovation costing $205 million. Its reopening has pleased many with its additions of a new public art gallery, improvements to the atrium garden, and the renaming of the building to the Ford Foundation Center for Social Justice. An architectural treasure and naturalist’s delight, the building is certainly worth a visit for those looking for some quiet in the heart of midtown. Located on the very tip of Manhattan in the beautiful Fort Tryon park, the Met Cloisters is an obvious choice if you’re looking for a break, both from the sounds of the city and the present day. A branch of the Metropolitan Museum of Art and the only museum in the United States to be dedicated exclusively to Medieval Art, the Cloisters gets its name from the inclusion of architectural elements from five medieval French cloisters in the building, some dating as far back as the 12th century. Thanks to the generosity of avid medieval artifacts collector George Barnard and other donors, the museum features many authentic medieval structures, and houses over 2,000 pieces of medieval art.

The most popular cloisters tend to get quite noisy during peak times of the day, so for a more secluded experience head to the West Terrace, where there are fewer people and a beautiful view of the Hudson awaits. Additionally, the café and adjacent garden is less populated and offers both snacks and splendid views of the river.

Septuagesimo Uno is a well-kept secret of the Upper West Side. Located on 71st Street, just off of West End Avenue, the 0.04 acre park is surprisingly tranquil amidst the bustle of nearby Broadway. Its picturesque benches invite New Yorkers looking to read their books and newspapers in peace amidst the leafy foliage of the overhanging trees.

Named after the Italian word for “seventy-one”, it is one of the smallest parks in New York City. In fact, it could fit into Central Park about 21,000 times. Opened officially by the parks department in 1981, it underwent a $14,000 restoration project in 2000. Though renovated, however, it remains a slice of secrecy and quiet in Manhattan. Many people go to the south entrances of Central Park only to find as many people clambering over the rocks and pathways as on the sidewalks of Fifth Avenue. But venture north and the park becomes a place of peace and tranquility. The Conservatory Garden is a perfect example of this. Tucked into the northeast corner of the park, between 104th and 105th street, it is Central Park’s formal garden and a six-acre formally designated Quiet Space.

Split up by style into the Italian, French, and English landscapes, the three distinct gardens within offer different beautiful flora and sculptures. Each garden has its own unique attractions. The Italian garden features a 12-foot high jet fountain, the French garden contains a a beautiful spring tulip display and Three Dancing Maidens sculpture, and the English garden includes a sculpture dedicated to the children’s classic novel The Secret Garden. Built in 1934 to replace the massive glass conservatory from which it got its name, the garden is also steeped in history. It’s entrance gate is part of the Vanderbilt Mansion that originally stood on Fifth Avenue between 104 and 105th streets, and today it preserves this historical significance within a beautiful public space. Another hidden Central Park gem lies on the Southernmost corner of the park. The Hallett Nature Sanctuary is located on the eastern edge of the park between 60th and 62nd streets, but despite its proximity to Central Park’s most iconic attractions, it remains relatively unknown. Perhaps this is due to the fact that the sanctuary was closed off from the public from 1934 to 2013, left to grow on its own with absolutely no intervention. During this period of isolation it served as a bird sanctuary, and it remains an excellent area of the park in which to birdspot today.

In 2001, gardeners reentered this area of the park to make it accessible to the public, opening in 2013 to become the smallest of the three public woodland landscapes of the park. Open daily from 10am to 30 minutes before sunset, it offers a feeling of wilderness steps away from Fifth Avenue.

The Gardens at St. Luke in the Fields

Though this spot in the West Village is hardly ever empty, it's a quiet place to enjoy some greenery. There are a few rules to maintain the site's serenity; Smoking, pets, and cellphone conversations aren't allowed.

Fiction Books to Escape In